How do you manage git credentials for different organizations? You may have some projects you work on at work that has a pre-push hook to ensure that your email is part of the correct domain. You might have your own personal projects, some of which might also use difference email addresses. Or, just maybe, you have a secret identity that you don’t want your other repositories to know about. How does one manage this schizophrenic multiple personality disorder that we call Version Control? 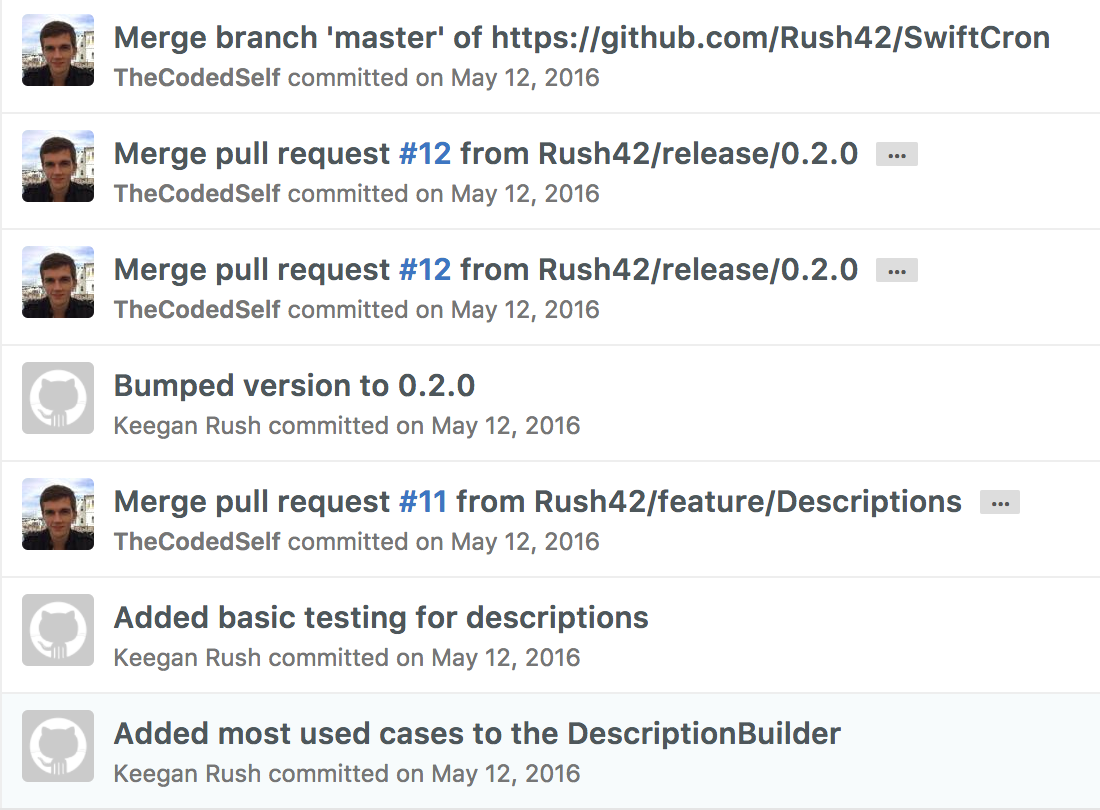 The commits that don’t have my image were made with my name but with an unknown email. So GitHub doesn’t know that it was really me and does not link it to my Github identity. What I need to do is to tell git to use the email that Github expects.

How to assume multiple identities

Git commits have an author with a name and an email. Run git log in a repository you’ve committed to recently to see some of the metadata of your commits:

Git uses the user name and email set in your global .gitconfig file, located at ~/.gitconfig or C:\Users\MyUser\.gitconfig. The [user] block sets the author name and email address for all commits. You can set it by manually editing the file:

This modifies the global .gitconfig for you.

Specifying identities at the repository level

So now that you’ve created your global identity, how about adding a different one for a particular repository? Each repository has its own config file in which you can override the global configurations - it’s located in the hidden .git folder. Take a look at .git/config inside your repository.

To create your repository-specific secret identity, edit the file and add a user config to override the global one:

Or, you can run the git config command and specify the change as being local to the repository.

This is the configuration that you should end up with in .git/config:

Now, you can use Git under your secret identity!

That’s too late for me, I’ve already committed with the wrong author email!

Sometimes you make a mistake, like this one here:

With a commit author like that, Batman’s secret identity is surely at risk of being compromised. Luckily, you still have the opportunity to modify this commit before you push it upstream.

All of the suggestions listed below modify your git history. This means that if you’ve already pushed your changes upstream, you’ll have to force push your changes. Even worse, if the changes are upstream and another developer has been working on that branch with the commits that you’re about to change, things can get really tricky. The safest decision is to refrain from modifying commits that are already publicly visible to other developers.

If the commit that you need to change is the most recent commit, you can easily change it like this:

git commit --amend allows you to change the commit message if you choose to, and the --author="Author Name <authoremail@example.com>" part sets the author name and email to whatever you’ve specified.

You can use it to modify the previous commit to the following:

One of my favourite tricks, the interactive rebase, can be used to commits other than the most recent one. This tutorial should get you up to speed with how to do a rebase.

We’ve started an interactive rebase. We’ll be presented with a text editor containing the following:

We attended the Policeman’s Ball under Batman’s identity, but it should really be Bruce Wayne. On the third line, change pick to edit.

Now we can amend the commit to set the correct author.

When you’re done, run git rebase --continue to move to the next commit that you specified to edit, or to continue to the end of the rebasing session.

Using the git filter-branch command, which is way beyond the scope of this blog post, you can do all kinds of crazy things. One of the more reasonable usages is to inspect every commit in your repository, check if it matches a particular email address, and if so, change it to a new one.

I’ve create a Gist on Github to do this: author-amend

Just save it in the root of your repository and execute it, or copy it and paste it in your terminal.

Changing author identities is not that hard.

Once you’ve been introduced to the right commands, there’s always a way to coax git into suiting your needs. There’s no need to put up with incorrect names, and definitely no need to scrap the commit and start again.

So, when something’s gone wrong:

Thanks for taking the time to read this, and I hope you learned something that might prove helpful in the future. If you did, please take the time to share it on Facebook, Twitter, Reddit, or whatever it is that people are using these days.