I’ve recently dipped my toes into Android development to see the differences in environment and tooling as compared to iOS development. While I haven’t done much as of yet, I hope to ship some Android apps in the future alongside some iOS ones. I figured it was time to understand the platform so that I can better relate to the woes of Android development.

Note that this is entirely opinion based, and these are only initial opinions. Understanding of any language or SDK fleshes out over time, and I’m looking forward to see how my understanding and opinions change as I write more and more Android code.

I expected to see much more boilerplate and repetitive code as opposed to iOS, where we have the ability for frameworks to be more powerful and simple at the same time by tapping into the Objective-C runtime. While this was true to some extent, I’d like to talk more about some of the other differences I noticed:

If you’re ever used a Jetbrains IDE or plugin, you’ll love Android Studio. It’s such a pleasure having the platform’s standard IDE being one by Jetbrains. I’ve been burned by Xcode too many times, namely due to bugs and lack of refactoring tools, and I for one am quite pleased with Android Studio.

Where you’d use a UIViewController in iOS, you’re using Activities in Android. While passing data through Intents is not perfect in my eyes, I prefer it to using the prepareForSegue method on iOS to see if the segue identifier matches the one you expect and then configuring the destination view controller. However, if you don’t need to pass data around, I must say that handling all your segues in a Storyboard without writing any code is very convenient.

I’m starting to see that we have it so easy on iOS when it comes to supporting other devices. There’s an almost unlimited number of hardware and screen size combinations for Android. Many iOS developers can name almost every possible device that their apps can run on out of the top of their heads, and that’s not something to take for granted. On Android I can see a need for a few if statements like the following:

On iOS, the amount of versioning checks is considerably less due to the practice of only supporting version N-1 (meaning today, I would support iOS 10 and iOS 9, but drop any support for iOS 8). This is a luxury that Android does not have.

Android specifies string resources in XML. Specific locales are XML files with the ISO country code in the name. iOS has a similar structure but with a nasty .strings file instead of XML where standard practice is to specify strings like the following: “home.loggedin.title” = “Hello, World!”; or even worse: “Hello, World!” = “Hello, World!”;

What I like about Android is that it’s strongly typed.

The first project that I built while trying to learn Android was an activity with a text field and a button.

When you tapped on the button, you’d be presented with another activity with a label that contained the text from the previous activity’s text field.

I was quite pleased with myself until I realized that I had forgotten to put in a navigation bar to get back to the first activity. Ugh, now I have to figure out how to embed everything in a navigation bar. How do you even make a navigation bar in Android? It took me a few seconds before I remembered that Android devices always have a back button. Lo and behold, a functional navigation hierarchy without implementing a UINavigationBar! Feel my power!

Activities can contain Fragments, which is sort of like a ViewController containing multiple ViewControllers as children and receiving all lifecycle calls that the Activity receives. You can easily add Fragments to an Activity in XML or in code using the FragmentManager class. No messing with Storyboards and Nibs and making sure that you correctly tie everything up! 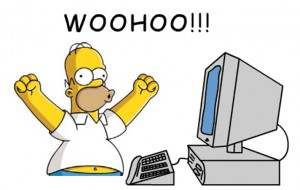 The Android Developer training documentation shows how you can get the behavior of a UISplitViewController that shows two views on a tablet, but uses a navigation hierarchy to navigate between the two views on smaller devices:

Except with Fragments, you’re not limited to that layout.

You may whine about Core Data now, but there’s nothing in Android stopping you from executing arbitrary SQL queries. You have the SQLiteOpenHelper class to guide you but other than that it’s pretty much up to you to manage your database. At least we now have Realm on both platforms to help us overcome the database nightmare.

Why would an iOS developer want to learn Android development?